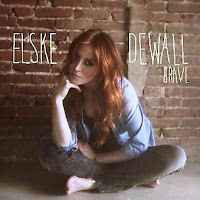 You can listen to 'Stains on my heart' here.

This album is quite an odd one out as far as I'm concerned. Her previous effort, 'Balloon over Paris', I listened to exactly three and a half song, before I laid it aside for ever. So it wasn't with very high hopes that I put on Brave for the first time. As far as what someone put into Elske DeWall's water supply, I do not want to speculate about, but that there was a great pop infusion in there is obvious. Brave presents the listener with some great pop tunes, with a few surprises in the arrangements of the songs, that give them a little extra. Elske de Walle from Friesland presents the world with an album that deserves being listened to and truly liked way beyond the borders of this small country.

The very clear sounds on Brave are a compliment to producer Holger Schwedt, (Anouk, Blöf, Di-Rect), who made Elske's voice come out trumps. She can use the different sounds her voice has in an optimal way. Soft and intimate on the title track or as growly she can get, with great double tracking here and there. At her growliest she reminds the listener of Anouk at her softest, as Elske is much more soft sounding than Holland's rockbitch #1. Whenever I hear something from Ilse de Lange, not to often I'll admit, it sounds something like the music on this album. So why do I listen to Brave?

Some songs, like the already mentioned 'Brave', are too soft and neat for me. At these moments her voice pulls me through to the next song. A song like 'Let it go' sounds like I've heard a thousand times before. Still the slightly fuzzed piano lead notes sounds great, Elske sings tremendously seductive and the refrain is great. And 'Jezebel' rocks in a truly laid back style, with the right quality of emotion in her voice. A soulful part that show some gospel influences in 'Sorry' and not only in the singing. The organ does its bit also.

Brave is an album for the moments that I like a little music that's more quiet, but still has a bite to it, with these attentive elements in the arranging that make the album very varied. Every element broken down into single parts, may spew out the words 'boring', 'been there done that', combined they make a relevant album by an adventurous singer and songwriter from The Netherlands. Elske DeWall dares to combine the familiar to come up with Brave. What I definitely like is that she stays away from all the histrionics that so often come with music like this, when r&b, soul and pop blend into Whitney, Maria clones. It makes Brave pure and natural. As it turn out, just the way I like it.

You can order Brave here