Days go by. The Offspring 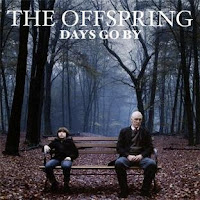 You can listen to 'Days go by' here.

Is The Offspring a band to take overly serious? No, off course not. Is The Offspring one of the best bands ever? Well, that answer may vary depending who you are and what your musical tastes are, but I'd answer no. Is The Offspring a good time fun band? Yes, they are. Are men over forty (even fifty) allowed to have fun? Hell, yes! So, I got that one from under my belt, in response to reading a review of Days go by in my tv magazine of this week. Before hearing the cd. Last week I saw the new The Offspring video plugged on You Tube and thought it to be so much fun. Perhaps more poppy and more than a little nod to younger punk pop bands, but who cares. I thought the song extremely good, melodious and great to shout along with. It pricked up my ears for the album to come.

Their first hit is about 18 years back now. 'Self esteem' is still a great song, that was followed by several more, with 'Pretty fly for a white guy' even on number one. More a novelty hit than a regular one, but they've scored enough to go way beyond the one hit wonders. The greatest novelty song of The Offspring is 'When you're in prison' by the way.

Days go by is an album where The Offspring does just that what it is good in. Uptempo punkpop songs with melody, lyrics to shout along to, with great lead guitar melody lines, to nod heads up and down to in a fast way and to jump around on. Do you need more in an The Offspring album? No, the band delivers and in several songs. O.k., the way they try to hang on in a somewhat cramped up way to find a new 'Pretty fly' deserves mild critique, but when I hear the title song again, I turn all soft and warm inside. 'Days go by' may well be their best song ever. And yes, it has a very familiar riff from the mid 80ties, I know. (Coincidentally I'm working on a review of that band's latest effort at present as well.) That's for lawyers, in this song it works wonderfully and it's just different enough. Some experiment with dub/reggae like bass and mariachi horns in which Dexter Holland shows off all his Spanish. A bit off a bummer this one.

So what that The Offspring's members are in their forties and fifties? As long as a band delivers the goods, who cares? The production process of 3,5 years suggests that Days go by was not an easy delivery for the band. Usually the album that follows after such a period is a deep disappointment. Not so Days go by. Together with producer Bob Rock they've made a loud rocking album. With the 'Cruising California (bumpin' in my truck)' as a bit of a dip, with its too familiar 'a-ah a-ah', too emo like overdubs, although the song is crafted well. The way 'All I have left is you' is laid out makes up for the previous effort. Almost a ballad, before it takes off in all the right directions. I can see myself jumping up and down, shouting Whoaooooooaaaaaa. The revamping of 'Dirty magic' is very well done. Some great guitar sounds in there. (I have to dust off my old Veruca Salt album 'Eight arms to hold you' hearing this guitar sound. Producer: Bob Rock.) All in all, a few dips, but for the rest great, great fun. The band varies its sounds and textures in the songs, but hardly ever wavers from a good melody. On the side Noodles can really let it rip every once in a while, so all attracted to walls of guitars are served in abundance also.

Need I say more, The Offspring fans and lover of good old-fashioned punk pop? No, I didn't think so. Bands come and go, just like days. The Offspring is here for now again.

You can order Days go by here