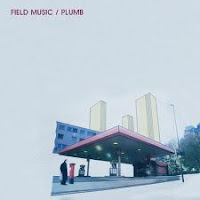 Only recently I discovered Field Music's previous record, 'Measure' and already I'm treated to a new album, Plumb. Not exactly a teaser of a title, is it? Never mind. With the utmost pleasure of 'Measure' in mind, I put Plumb into the player. At first and second impression, the album seems a continuation of what I heard before, maybe somewhat less poppy. On third and fourth listening Plumb started to divulge something more of its beauty, well, like a plump girl does once one gets passed the first impression.

Field Music has a lot of The Beatles ingrained in the band, but I'm definitely hearing Klaatu in there this time around. David and Peter Brewis are not afraid to put some influences into their musical efforts. Progrock? Sure, but not in the overly symphonic way, but in the structure of a song like 'A new town', with its tireless riff. The biggest embellishment of a song being the tinkering sound of a small bell. At first glance most songs on Plumb are difficult and certainly not instant ear pleasers. It is only after listening more carefully on the headset that the harmonies come through -10cc like harmonies with the edginess of Talking Heads- and the little sounds in the back ground.

What also becomes clear is that I need to listen quite attentively. Some songs are over before I know it. Where a progrock band of old (and new) would have turned these individual ideas into two or three songs, Field Music doesn't try to squeeze 12 ideas into one song. No, this is the song. Now it's over. Here's the next. 'Guillotine' has everything a song of UK has, but is much more bare, down to its essentials, and trusting on its own beauty. It happens to be one of the longest songs on the album with a little over three minutes. UK, Yes or Genesis (of old) would take 7 or 10 for essentially the same ideas.

Looking at the sleeve and listening to the music, I conclude they fit very well together. Lots of straight lines, hardly anything extra to spare. Sleeve and music are more Le Corbusier than Rubens. Not everything is straight lines though. Like the trees in the background of the sleeve the violins in 'From hide and seek to heartache' (with a very mysterious lyric: "The games we used to play. From hide and seek to heartache") definitely fill out. And let's not overlook the choir starting off, and ending, "How many more times". Together with 'Ce soir', which is like a piece of chamber music, we hear two very short songs, but showing hints of the prowess of the Brewis brothers' song writing abilities. Not quite Brian Wilson, but seriously trying.

Plumb is not for those that like a happy-go-lucky album playing in the background and easy to sing-a-long lyrics. Everything but. However, for those that like to invest some time in getting a relationship with an album, take out your headphones and shove Plumb into the tray. You're about to go on an adventure of stylised pop music that will get your senses reeling. '(I keep thinking about) A new thing' ends the album in style, wanting you to do everything but thinking about a new thing. Turn it on again!

Would you like to contribute to WoNo Magazine's blog? You can. Leave us a message and we'll contact you.