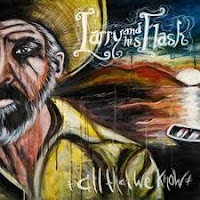 You can listen to a Larry and his Flask song here.


Can a band that made an impression for a lifetime just over two weeks before repeat this? In short are they as good as I thought after having been swept from my feet by a musical storm of epic proportions? There were two major differences: the first I had expectations and secondly I now knew the songs. And thirdly it was at least 10 degrees Celsius warmer this Wednesday.

Let's not keep the suspension up unnecessarily. Yes, Larry and his Flask are as good as I thought and maybe even better. They played ever so tight. No matter how great the gymnastics of the rhythm section, including the acoustic guitar, they hold everything together, so everything else with strings (or horns) can excel and make the music sound like Larry and his Flask.

The amount of energy that is hurled at the audience is tremendous. Litres of body fluids are lost, drinking a necessity to stay on their feet. And the band gets it back from a grateful audience. Everyone concerned had a good time. In that sense the gig was better than the first. There was more interaction and response vice versa. The name of the band is obviously spreading as there were more people than the first time and not just the same with a few friends. Maybe because it was so warm they played slightly less "wild" or maybe because they had the Q-Bus in their back pocket. Thus they seemed to play slightly better that the first time. A little more music a little less antics. It only made them better.

Again I enjoyed the excellent lead guitar playing by Ian Cook, the stage presence of the brothers Marshall and Dallin Bulkley, and the string magic from Andrew Carew and Kirk Skatvold and their horns as well. Again I noticed how good the members sing together. It should be a great surprise if this band does not fill the Paradiso within a year. They have the stage presence, the energy and the songs.

Because of a technical difficulty we got to hear a new song. A great ballad, that they recently recorded for an EP. Everyone went of stage, leaving Cook to sing and play guitar with the unfortunate Bulkley to fix his gear. One by one the members came back on stage to add another instrument to the song, starting with the trombone. A great and intimate effect. The fact that they muster a great ballad as well, shows the potential of Larry and his Flask. Beyond the punk rock fuelled Americana there are six guys who can really play well and know how to compose great songs.

Again the advise: when they're in your neighbourhood go and see them. It may well be that you are one of those few that can say: "I was there, when Larry and his Flask played" fill in your local pub or concert hall. Hell, they may even be busking on your street corner for the last time.

Thanks for the music, again, guys (and the deliciously cold beer at the end). Expect an interview with Larry and his Flask on WoNo Magazine's blog soon.

One thing though. I've discovered a band rule. No more than four beards in the band at the same time!

You can buy All that we know here