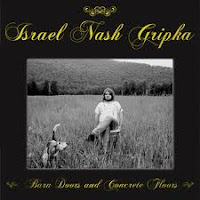 You can listen to 'Goodbye ghost' here.

Saturday and time for some roots rock. Unfortunately it became an evening which never really came alive. Gripka and his gang were tired or uninspired, maybe both. Somehow the show got stuck in obligatory versions of his tunes. Tunes which can also sparkle and growl as we had seen previous October at the same venue.

So, I'm going to be brief. We heard some nice stories about moving to Texas, shotguns, neighbours (well, one), the ranch and granddad, another about a fantasy of living on a house boat in the canals of Leiden, but the songs just didn't shine. After explaining the coming into being of 'Baltimore' something changed. The song finally seemed to gel the band and audience. The soloing was taken to another level, one step behind bending strings, as inspiration seemed to hit in sight of the finish line. Unfortunately this was the last song. In the encore he played a new song and again something seemed to click between band and audience. This is how it could have been, but didn't happen. And no Neil Young cover!

The two songs performed solo were a nice intermezzo. Halfway into one of the two songs Gripka switched his guitar to zero, turned away from the mike and sung a part of his song with his very powerful voice. He probably busked a lot in the past. The fact that he could perform this way, unhindered, speaks volumes for his audience. We could hear the plain strings of his electric guitar.

Gripka has some great roots songs and if the new song, something with 'Rain' in the title, is the standard for his new record, his fans are in for a treat. It just wasn't to be this Saturday. I know he can do better, but maybe this was quite good for people seeing him for the first time. Anyway, he had a devoted audience that listened in silence and gave the four musicians the respect they deserved. And cudo's for the bass player with these lovely runs of notes he managed to weave into the songs.

Would you like to contribute to WoNo Magazine's blog? You can. Leave behind a reaction and we'll contact you.

You can order Barn doors and concrete floors here