Interview with The Fudge

It was somewhere at the close of 2011 that a bunch of new music that had entered the house was playing. During diner something new set in. A lot of noise, but a lot of energy as well and great fun to listen to. Both son and dad pricked up their ears. It did not take long for us both to have a new band we truly liked and made an appointment: As soon as this band plays in the neighbourhood, we go and see them. In the meantime this blog was started and I wrote a review of the album. We saw a show in March and what a show it was. Both reviews became very well read articles on the blog of WoNo Magazine, so why not add an interview? Keyboard player and background vocalist Darius Timmer agreed to answer some questions, despite graduating from the conservatory.

As not every reader will be familiar with the band, can you give them a short history? 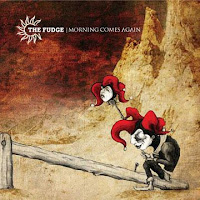 Here it is. It's a big rock. And it's magnetic.

Brought together by accident, on a cold evening in 2009, six guys decided to embark on a musical adventure. The Fudge was born.

Every band member had his own musical background, and during that first meeting it became immediately clear that this diversity would prove to be one of the band’s biggest strengths. ‘People were constantly having new ideas. We wrote three songs during our first rehearsal’, says Darius Timmer (keys and vocals).

After that, the band decided to make an action plan. Midas Treub (lead vocals and guitar) recalls: ‘We wanted to play as many gigs as possible while working on new material at the same time. So we decided to enter all the competitions we could find, in order to finance our first album.’

And so The Fudge started playing at many Dutch venues with a whole range of instruments, effects and techniques. Combining Rock, Balkan, Folk, Pop, Psychedelic and Ska. They dubbed it Magnetic Rock: loud, tight, and great to dance to.

I read that the band members met at a music academy. If so, was this in any way of influence at the start of the band and how?
It was of influence insofar that we actually met there and of course knew who we were and what kind of music we all made. But the band has developed separately from school. Besides, we’ve all just graduated so we’re all free!

The Fudge's music can be categorised as adventurous. Many different things happen within one song, ideas are abound, surprising the listener several times and thus inviting to listen again and again. At the same time all the breaks and bends of these songs need to be translated to the stage. How do they do this, I wondered? So I tried to come closer to the mystery of the creation process of The Fudge.

Talking of your music, I think it’s downright adventurous. How are the songs composed, simply on an acoustic guitar?
Some of the songs are, by Midas. Others are written in rehearsal when one or two of us come up with a short idea that gets moulded into a song. We’re usually pretty quick with playing along, so it sounds like The Fudge right away. But then we can take a very long time to actually finish the song in a form that we deem fit. Of course if Midas arrives with a song that has a pre-defined form then it’s not the form but the sound we start digging for..

And what happens next in the arranging phase of the song? Are all the breaks and changes of tempo foreseen upfront?
Usually when we play the song a couple of times in rehearsal we start adding and subtracting things. One guitar too many, or just that extra break for a boost right before the chorus. It’s all playing from there. Sometimes we even change the song after a live performance!

Let’s take the break in ‘Behind the wall’ as an example. There’s the full out great intro/repeated intermezzo and then the song breaks down in a skalike rhythm, but sounding like the music from an old-fashioned roundabout that’s being sped up. Can you take us through the creative process of ‘Behind the wall’ and who was responsible for what?
Midas actually wrote that. At least he had the riff in his head for some weeks, until one day he entered the rehearsal room and just sat down and played two verses and choruses. We added the bridge in rehearsal and then the break which went to a fast end-chorus. We had a different break at first but nowadays we changed it again.

What are the influences of the band?
Great rock bands such as Queens of the Stone Age, Millionaire or System of a Down. But that’s really bands that influence us as a band. We’re 6 individuals with 6 different tastes and musical backgrounds. And that really shows in the music! So everyone brings their own list of heroes and influences to the table and then we start looking for a Fudge-sound in that.

When I say System of a Down, what’s your answer?
Although we all love the band, it’s not our main influence. We are not trying to copy their style or their music. However we can not deny that their music has been of influence in our musical progress throughout the years. But that doesn’t mean we’re trying to recreate whatever they’ve done. They’re a great band.

At the same time it’s obvious you love melody. Is the music of The Fudge the best of all worlds for the individual members?
It’s the best of all worlds FROM the individual members. If you have 6 different backgrounds then of course there’s parts your ‘background’ is up front more,  but in the end we all apply our musicality towards the song. Is it “The Fudge”?

In the lyrics there seems to be a fascination for the slightly morbid, but also for things that may be there, but can’t be seen, hidden. What inspires you lyrically?
Nobody really knows what goes on in Midas’ head. I’m not sure if you want to know even ;) Although we can say one thing: “Insane” was written out of anger (if that wasn’t obvious yet). No but seriously, the lyrics of the Morning Comes Again album are all about a trip, a journey if you will. The album represents the feeling of experiencing these crazy adventures at night and then when morning comes again you’re back with your feet on the ground. That’s nice, because you survived. But you also want to go back, know how the story continues. Bit vague, huh?

“Fuck you, bitch!” is not exactly corresponding with the title of the song ‘Sweet little princess’ who you sing to. The mood within the song is also very extreme. From anger to despair? How does the listener have to interpret the two?
Well if you’re being torn between two sides of love, then you’ll know what this song is all about. Actually you love her, but you’re so mad at her that you don’t want her around any more. That is one way of looking at it, at least…

The voice of Midas is not the everyday rock/metal singer’s voice. Were there ever doubts of Midas being the singer?
Midas is the singer. No doubt. His voice is compelling, strange but evoking. A real character.

On stage everything comes together, but the songs are written and constructed elsewhere. What gives you the most pleasure, creating or playing?
Both are really fun. There’s too many differences to compare the two. If you’re playing the right audience then you get so pumped up and happy, that’s the best feeling in the world. But if the pieces fall together in a rehearsal and you hear a new song for the first time then you just don’t want to stop listening to it! It’s genius!

What were your expectations for ‘Morning comes after’ and were they met?
We sold out Paradiso! And we sold over 100 copies of our album on that night. And since then we’ve had a quite a share of amazingly good reviews. We are more than happy with the morning after!

What can we expect from The Fudge next?
Our clip for Morning Comes Again is coming out soon! Very excited, to say the least.
(At present it has not been released, but watch their website for news. The first video for Too busy being delicious can be found there.)

Do you have any plans for touring abroad?
Plans, yes. We’re working on making them reality. It’s hard work, but we’re convinced we’ll get there.

Thanks, for the interview and hope to be able to see you play again in the near future!
Thank you, and please drop by any of our gigs. You can find all the dates on our website.
Gepost door Wo. op 15:05