Interview with The Parlor Soldiers 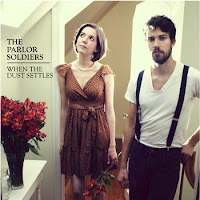 Two months ago I saw a review of the cd 'When the dust settles' and listened to it on the website of the band straight away. I decided to buy the album on the spot. The opening track isn't a song, it's a statement. 'Shallow grave' grabs you by the lapels and doesn't let go. You can listen to it here. After writing a review of the album myself, btw one of the best read pieces on our blog so far, I reached out to the band for an interview. Here's an opportunity to get to know Alex and Karen a little better.

As your band is not yet known beyond the hearsay circuit in The Netherlands, could you please introduce yourself?

Howdy!  We’re an alt-country and Americana band from Fredericksburg, Virginia.  Alex Culbreth and Karen Jonas lead the band, trading shifts on guitar, banjo, and a junkyard bass drum with a tambourine strapped on top.  Dan Dutton fills in the holes on the standup bass.  We’ve been playing together for about a year and we just put out our first album in December.  We’re really excited about the response we’ve been getting and we’re having a great time playing a lot of shows on the east coast.

What was the inspiration for the band name, as parlor and soldier is not the first association that comes to mind with the two words?
“Parlor soldier” is a slang term from the Civil War that refers to someone who is not a true soldier, a poseur, someone who would more likely be seen in a parlor than on a battlefield.  Fredericksburg was a central battleground for the Civil War, so we liked the regional aspect and also because you would probably find us playing guitar in the parlor instead of fighting on a battlefield!

You’re music could be described as “old”. What makes this form of music relate to you, that you’ve decided to write songs in these styles?
Many of our influences are from days gone by, Hank Williams, Johnny Cash, and Patsy Cline being chief among them.  We’ve both dabbled in other styles of music, Alex came from a punk background and Karen played more strictly folk music, but we both really enjoy playing in the Americana style.  People relate to the stories because they are rooted in American tradition.  And we love the dancing and boot stomping!

Listening to your lyrics I’m drawn in to the story, I can almost see it in my mind’s eye. Are you aware of this evocative quality and is it a conscious decision to write this way?
Thanks, we do make a conscious effort to use concrete imagery in our songs.  Lyric and story are very important to us.  We enjoy the challenge of attempting to translate feelings through stories and characters instead of through emotional language.

As you in several songs sing/tell a story, what comes first to you the lyric or the music?
Each song develops differently.  The music comes first for some and others start with a few lyrics or an idea.  Most lyrics are written with guitar in hand though.  “Sinner” was an exception, Karen had the entire lyrics written before we sat down to add the music.

What inspires you from the lyric point of view?
Most songs start with a line or two and no particular direction in mind.  The story develops as the song develops.  Some take twists and turns that we don’t expect when we start them.  The specific lyrics are inspired by books we read (Karen and Alex both have degrees in English Literature), and other artists we admire such as The Drive-By Truckers, Gillian Welch, Ryan Adams, Connor Oberst, and Todd Snider.

Several lyrics seem to me like observations from long ago, 19th century or the Great Depression thirties. Supposing I’m correct, are you a romantic person as the past is concerned?
Yes, we both enjoy imagining past circumstances and placing our stories there.  The Great Depression fuelled a lot of hard-times music that people relate to in the current economic climate in America.  Stories like Bonnie and Clyde, which we reference in “Lawless”, are relevant again today.  Also we feel like the setting fits the sounds we’ve developed.

I truly liked the observation of the husband and sheriff being related and “blood runs thick in the South” in Shallow grave. Does this refer to an actual incident or event?
No, that story was purely imaginative.

I hear several and relatively different influences in your music. What are your main musical influences? (One guess, Johnny Cash? An obvious one of course as you mention him in ‘Crazy’?)
Johnny Cash, Bob Dylan, Joni Mitchell, and some others we’ve mentioned previously.  Karen came from a quieter folk background and only recently began writing in the Americana style.  Alex used to play punk music but never could find a band to play with, so he started playing by himself and developed his current style that way.

How is the song writing divided between you? As obvious as the lead singing suggests?
Mostly you can deduce the primary songwriter by the lead singer, though we often reference each other for lines and ideas.  As an exception, Alex wrote the duet “Long Gone” by himself, and also wrote “Don’t Let Your Dreams Get You Down” for Karen to sing as the final track.

How did you meet and what made you decide to make music together?
Alex and Karen were both active in the Fredericksburg music scene and knew each other vaguely when Alex invited Karen to sing with him.  Alex’s solo album previous to “When the Dust Settles,” called “Women and Trains,” features Karen’s background vocals on several songs.  We met Dan through a mutual friend, and we were so excited that he was available to play with us (standup bass players are hard to find!).

What are your plans for the near future?
We have a busy schedule of gigs coming up, including a small tour through the Midwest in April and trips to West Virginia and Tennessee.  We have some big shows coming up opening for artists that we admire including Jonathan Byrd, Chris Knight, Chris Smither, Jeffrey Lewis, and Spirit Family Reunion.  We are also working on establishing a presence on the radio and in online blogging communities.  We are really excited by all of the opportunities we’ve had and we’re looking forward to whatever comes next!