For those young readers (and all those others who don't know), Brian Wilson is the genius, song writer of the Beach Boys. He is the only surviving form the three Wilson brothers who were (the base of the) Beach Boys. And he was the depressed one who always said he would commit suicide.

The concert was called 'Smile'. Smile was the project he was working on after 'Pet Sounds', the album acclaimed to be in the top ten of best albums ever, almost at the level of 'Sgt Pepper's Lonely Hearts Club Band'. Ok, being a Beatles fan, that is/was hard to believe for me, but I also thought that The Beach Boys were part of the fantastic age of positive music. As I said, Smile was the project he was working on when he had to leave the band temporarily for being depressed. It never came to an album with those songs, but now, almost thirty five years later, he is touring and those songs were part of the show. 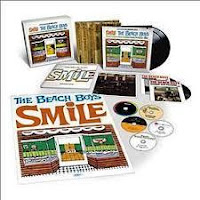 He had been to Holland in February with this concert, but it had been sold out in a day. I didn't manage to get a ticket. So when he came back for this concert, I immediately bought the tickets when I heard he was coming. I must admit that I thought about it for a few hours. I could also have bought a small television for that amount of money, but I made the right decision. I'll never have the chance to see these great artists from my youth again, so I should embrace them while I (or better they) still can.

Most of my surfin' memories were of the start of the eighties. I was just over twenty and owned a Triumph Spitfire, an English convertible. And when the weather was fine, the top came of and I played Surfin' songs on my cassette player (no discs in those days). So for me the Beach Boys were connected to those good, sunny days when life was fine. Driving around with my girlfriend of those days (who happened to be my first girlfriend also) on my side made life beautiful.

Before the concert started I looked around and found out I was one of the younger people around. Most were end forty until mid fifty. All quiet people with lots of life experience. Only a few youngsters were present. People drank coffee, only a few had a beer.

The concert started with close harmony of old Beach Boys songs. Obviously to get in the mood. It worked, I was there right away. Before the break, he played old songs and new songs from his new albums. But it perfectly made sense. Brian Wilson stayed Brian Wilson and his new songs were very similar (in a positive way) to his old songs and I never had to ask myself what I was listening to. An hour and fifteen minutes later (I hadn't noticed that the time had gone by) they broke for a little pause. After they came back, he really stepped up another level and gave us his Smile project. All new music but it was as if I came home, I listened to music that was such an natural evolution from Pet Sounds. Everybody was just quietly listening what he gave/brought us. The first number was fifteen minutes, the next two over ten minutes a piece. I was listening with my mouth open, I was completely engulfed in/surrounded by the music. He ended with 'Good Vibrations' and the concert hall now was full of swinging people. After they had left and, of course, come back for their encores, they played another eight Beach Boys songs. The whole concert hall was swinging. And then, after three hours, it was over and all I could say was: 'fantastic'. It had been long ago that a concert had touched and amused me in that way. I have been to a Supertramp concert over a year ago, also to see some of my old superstars. It had been a good, but smooth concert, but it was hardly vivid.

Brian Wilson lives and he sparkled. He is old, looks very pale, doesn't walk around that energetic, but the concert was super, great and very vibrant.

Do you want to contribute to WoNo Magazine's blog? You can. Leave a reaction and we'll contact you.
Gepost door Wo. op 13:16